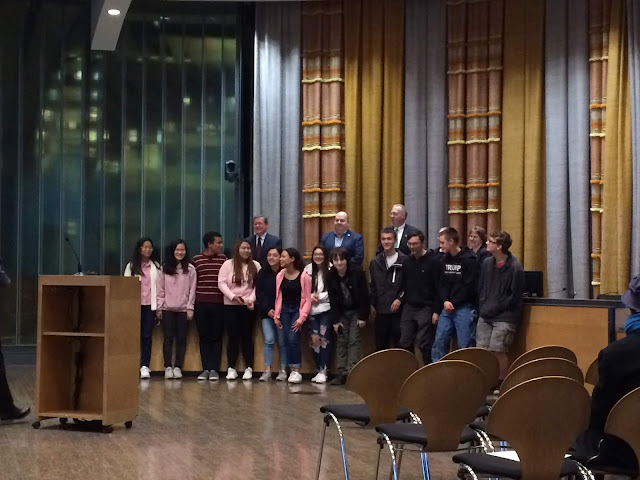 The egg-shaped Bremerton City Council chambers is on the first floor of the Norm Dicks Government Center, downtown, and when I pulled open the confusing glass doors Tuesday evening, it was nearly empty; some youths in the back row of the 150 or so chairs, and two dark-gray-pants wearers chatting up front. I found copies of the agenda, which said there was a Briefing 5-5:30pm on the 6th floor, so I elevatored up there but found the Mayor and two associates were headed downstairs. It was 5:09. A brief Briefing!

The Mayor introduced himself to me in the elevator. "I'm Greg Wheeler, the Mayor!" he said. I gave my name, somewhat too seriously, as if a cop or judge had asked. "A citizen," I added. Was I trying to sort of make fun of the pompous way he'd introduced himself?
"He's a citizen, too!" said one of the associates, a suited woman with a necklace of large white beads.
The Chambers has (have?) a  polished floor and long, orange-and-fringed curtains on glass-panel walls. Feels like being in an 80's sitcom. I spent most of the 80's watching sitcoms, so I know. And the Mayor looks a little like Mork, in the big egg.
A few more youths dribbled in. Councilor Lori Wheat clip-clopped back to greet them. She wore a big lipstick smile, tight bun, name badge, black blazer and square-toes. "Are you from Mrs. Mumble's class?" she asked. "Do you have any questions?"
The kids wanted a selfie with the Mayor. Then a kid in yellow Knights socks wanted the wifi password. "Chambers 2019" is the wifi password. Capital C. The kids had shiny dark-gray district-provided Chromebook laptops, except one, with floppy Harry Potter hair, who had a beat-up little paper reporter's notebook filled with inky scribblings.
After the Pledge, which several kids said quite loudly, Associate Pastor Bob Cassis gave a prayer. "Father, it is fitting to start this meeting, in a land whose motto is 'in God we trust,' with recognition of you and your control over all things that are," Cassis said. All but one of the egg people were still standing up. I had to sit to note this particular phraseology because I have been wrestling with WTF feelings whenever I drive past a church in East Bremerton whose readerboard states "Only God can change your situation." I disrespectfully disagree. Only YOU can. To say God is in control seems like a cop-out, a resignation to being pushed around by the winds of fate. Yes, fate can be windy like a hurricane. But we set our own sails in the face of those winds of fate, aka God. If you were to see your life as a ship on a journey, I neutrally submit that the wind is not in charge of where your ship goes. The captain is in charge. The captain is you. 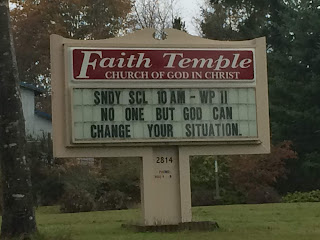 Anyway, Bob also asked God, at the City Council meeting, to notice that we have a problem with the homeless in our community. Meaning, the homeless have a problem -- the Union Gospel Mission needs new sprinkler systems, and is being shut down until they get them. Bob also asked God, at the City Council meeting, to protect first responders. And he thanked God for the Navy. "May they always be at peace." Hey, Bob. Our country has been at war for like 90% of the time since George Washington. I think you meant, "Thanks for the Navy. May we always be at war."
Then the Mayor addressed the Council. He showed a photo of the local marina and talked about permit activity. I guess he was talking about building permits, though, not any permits to do with boats or marinas. He showed a table of how many tens of millions of dollars' worth of building has happened in Bremerton for the last decade or so. The numbers are getting a lot bigger. "There is optimism, there is prosperity," he said. "There is going to be a bow wave of inspection activity." He encouraged the City inspectors to get right on that permitting.
Then he showed a slide of a 51-foot boat on fire in Dyes Inlet on Sept. 27, with a fire boat squirting water on it. It took just 15 minutes for the boat to be reached by first responders, he said.
Then he congratulated a human resources analyst for getting her Bachelor of Science in HR Management, and gave a little bio about her.
Then he talked about the Kitsap Rescue Mission. "The newspaper said it," he said. Here is the link to the Kitsap Sun article about the rescue mission. Get ready for a million ads.
He said that he'd contacted the Salvation Army on Monday (Sept. 30) and asked them to consider providing shelter for those soon to be displaced. "They were very positive towards that fact, motivated to be part of the solution," Wheeler said. "Their second floor is suitable to house these folks." Okay, but if that's so, why haven't they been housing other folks up there?
Next was Public Recognition, the time when people get to say their piece for 3 minutes at a time. Anna Mockler, wearing a City of Bremerton staff badge, thanked everyone who helped set up the Open House for Callow Redevelopment. Last week there was a walking tour around Callow; the City is gathering ideas for how to redevelop or improve the area. "There are multiple purveyors of adult material" on Callow, she said, "which seemed to take them by surprise."
My favorite thing is the movie theater that's painted all black, and the front door are exit-only, with no door handles, and inside are reputedly some really great peep-shows and glory holes and other depraved, wonderful, yet totally repulsive not-sex-but-sex-watching, and probably also actual sex, too. I bet if you ask at the store next door selling porn, feathery teddies and whips for bored middle-aged marrieds, you can get some info on how to get in there. Probly.

Anyway, she was the only public commenter. I guess she's running for Council, Seems very motivated.
City Clerk Angela Woods read numbers about how many dollars went in and out.
Then President of the Council, SomeGuy Younger, gave a presentation. Younger, a tall redheaded fellow in a green tie, looks sort of like a youth basketball coach. He Presented about raising the Mayor's salary from 107,000 to 114,000. Younger was around when the Mayor's salary was reduced, in 2012, when Patty Lent was mayor, from 122,000 to 107,000.  I liked his explanation of the Comparable Cities table shown in a slide. Perhaps so the mayor could understand, he explained what how the "average" is found : you add them all up and divide by how many there are. He averaged the mayor salaries in Edmonds, Mount Vernon and Lynnwood. It was like a real-world, high-school math story problem.

Public comment on this issue  was just one person, Paul Goodyearson, or something, a former City Manager in San Clemente, California. He said, "you should compare his salary to city managers' because that's what he does." We have a "strong mayor" style of government. Places with "weak" mayors have City Managers to do all the hard work, I guess.
Then the Councilors gave their 2 cents. Councilor Richard Huddy said, "I was not at the meeting, I was on vacation. ... I don't really favor any salary increases as long as the streets and sidewalks are under-funded." Then he went on and on about how he actually thinks the Mayor should get 139,000 per year, since he is the CEO of the City, earning less than the department heads who report to him. Department heads earn between 126,000 and 171,000, he said. "It's just not appropriate" for the department heads to earn more than the CEO. I personally disagree entirely. The department heads probably oversee more stressful things, things that involve safety and stuff. Who gets that 171,000 though? The police chief? I hope whoever earns all that money is donating a lot to charity, because you know what Bremertonians need even more than street and sidewalk repairs? Housing, food, mental health and physical health, new-parent education programs, free hot meals for people, a place for people without homes to shower and sleep safe and warm.
Anyway, after more comments, the motion to give the Mayor a raise passed unanimously.
Next, the council members each gave a report.
Sullivan showed a slide of an advertisement about an upcoming something at Albers Vista Gardens. An advertisement?! How is that ok, for a city councilor to advertise a garden store at a council meeting? WTF? Hey, shop at my fave store!
Wheat promoted some more community-minded events. Donate socks during "Socktober," drop them off at First Christian Church where she has her monthly meetings. Go to the Police and Community Together (PACT) event, 5:30 pm, Oct. 15, at the Marvin Williams Center, 802 MLK Way, to talk about hate crimes and domestic violence with the Kitsap County Sheriff and Bremerton Chief of Police. Go to the Taste of the Philippines, 1-4pm, Oct. 20, at 1240 Sheridan Road, it's free!
Goodnough said something about an EPA Brownfield grant. Callow could be poisoned by more than just the objectification of women and violence towards women. He didn't say that last part, but he did talk about "poison" and "Callow."
Huddy showed many many slides about the Sun, the Solar Cycle, the Solar Maximum, the Maunder Minimum, and global tempreatures over the past millennia, and I felt like I had switched the channel from Mork and Mindy to the Fox News Weather History Report. But he was trying to get us to buy a sidewalk snowplow for Bremerton. He showed the snowy sidewalk on 11th during the big snowstorm last February. Then two pictures of shiny new snow-moving machines.
Younger's report was, "I see a bunch of high-school students here." He asked them to send one of themselves to the podium. Rowan Cost was the appointed kid -- the kid with Harry Potter hair who used a real notebook. We're here for Civics class, he said. The assignment is to take notes on a meeting. Then it was time for another group photo.
Yep!