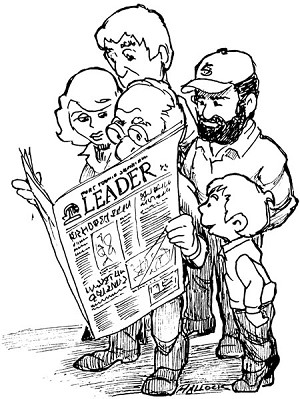 This week's Leader editorial by whoever you are -- the fop in the bowtie or what -- is irritating. "We aren't satisfied, either," says the headline. If you're not satisfied, whose job is it to fix it, if not yours?

Since the Leader has effectively stopped speaking to me, I will put my Letter to the Editor here and not there.

Quit trying to be cute, it's fucking irritating. And use your real goddam name when you write an editorial. Your real name should be the byline. If you're ashamed or embarrassed, then fix what you do wrong and write something you're not ashamed of, and then sign your real name to it.

As a writer, it bugs me when other writers make their writing process the subject of their writings. I don't care about your process. I want to read something good.

Not to put anyone on a pedestal, but I really miss the Leader as led by Patrick Sullivan, the former Leader editor, a truly community-minded journalist who worked hard to make the paper an ethical, readable, relevant historical record. I cannot imagine him ever writing such self-pitying crap as "We aren't satisfied, either."  For one thing, he wrote about other people, not about himself. There are more interesting and important things going on besides people laughing at you for PUBIC instead of PUBLIC. Let it go, dude; yes, editors make their mistakes on the front page; but nobody gives a shit that you feel chagrined. You should, but still, nobody cares.

Since you seem to have your head stuck in that which you set upon the seat of ease, here are some alternate ideas for editorials: The Supreme Court's visit; the sewer in Hadlock; the diminishing numbers of Rhody Fest volunteers; gray whales washing up on the ocean beaches out in the West End; the opioid epidemic; the weird stuff you can check out from the PT Public Library; the Race to Alaska; the housing crisis; the Master Gardeners; the mental health providers at Jefferson Healthcare; the lack of rain this month; the derelict vessel in Mystery Bay.

Yes, it seems a little petty of people to complain about typos. But don't bitch about feeling unappreciated. Most of the people bitching about the Leader typos have jobs that also don't pay them what they're worth and who also feel unappreciated sometimes. If it bugs you to have your errors pointed out, then stay late some Monday night or come in early on a Tuesday and reread everything yourself! As the editor -- oh, sorry -- The Editor -- your job is to pay attention to the community outside the historic sandstone walls at 226 Adams Street. Get the fuck off your high horse, floppy, and write about stuff besides your own feelings.

Yes, there are still some good stories in the Leader. There are still good things happening. They get written about. It's good. I'm glad it's there.

You should be glad people complain about typos; it means they're still reading that shitty paper. Quit whining about how hard your "4.5 souls" in the newsroom work and for how little money. How does that half-time person feel about you saying they only have half a soul, by the way?

The "Country Mouse" is equally irritating, and just as dull. I have always preferred local papers to the New York Times. That's just a Mafia voicebox for our Mafia president. We live in a global world, dumbass. We're not all as obsessed with status as you seem to be. Some of us love Port Townsend and love to read and hear stories about people who live in Jefferson County. You're dead wrong that all journalists want to write for the New York Times. Local, community newspapers, like local, community politics, give many more people opportunities to participate and do more good than giant corporate behemoths, or national politics.

I am eternally grateful that Tom Camfield continues to write his long, readable, typo-strewn, intelligent, outward-focused comments on the Leader website. His stuff is usually worth reading, besides maybe the obituaries (when the names are right).

And yeah ... I'm annoyed at the Leader because they didn't respond when I asked for a job as a reporter; but I've heard it's a horrible place to work. I don't care if Lloyd Mullen is having an affair with the ad rep, and I don't care if the culture there is now centered around excessive alcohol consumption and other bro-like behavior. But I do care that the paper sucks now. I am almost worried about it getting swallowed up by Sound Publishing after reading Scott Wilson's piece fro a few weeks ago; but it's difficult to support the Leader when it's got these editorials that irritate on so many levels.  Also when they seem to be blocking me for really petty reasons; not just disregarding my job application (which is totally understandable; I am also extremely difficult to work with, sort of an asshole, moody, self-righteous, frequently prickly, etc., etc.)  But I'm worried they're also letting petty dislike get in the way of effective business practice; and readin editorials that suggest His Supreme Editorialness is a linguistically show-offy nitwit just makes me feel sort of sad and miss the old Leader.

Not that it was ever perfect -- far from it. The dear old Leader always sorta felt like rah-rah blah-blah, but now it seems like people writing don't even really "get" Jefferson County's deep-down awesomeness; there's not as much deep old local-history knowledge behind the news, now; it is approaching the feeling of tepid pap, with some pretty great photos.

BTW Leader, we don't need you to publish the Tide Tables. When you ran the list of how the health department graded local Restaurants, but edited the list to only include some of the local restaurants and also ran giant house ads and a half-page of tide tables, I thought that was a very poor editorial decision. Those of us who want the tide tables will probably have other, really easy access to them. Printing the whole list of Health Department restaurant ratings would have been a better choice for that space. I know it's tough to fill up the pages every week; I suggest you actively court regular columnists who are not just retired white men. Yeah, I know, PT is basically overrun with retired white men. But here are some suggestions for columnists: Christine Jacobson, Daryl Dietrich, Jacki Pallister, Taylor Austin. Email me at chimacumpress@gmail.com if you'd like to be connected.

People talk to me about the Leader all the time. They're saying a lot worse stuff about you than typos. Used to be known as the MisLeader, but now (and I apologize for offending the highly athletic and intelligent cheer squad members out there in the world, but you gotta admit there's a cliche about your thing) .... now people are calling the formerly beloved MisLeader, the CheerLeader : insipid, narcissistic drivel.

So, to mr. un-easy chair, nameless Editorial writer: I don't give a fuck about your typos. When you feel like nobody respects the hard work you do, maybe you should just keep trying to do some good hard work instead of complaining about it in print. That shit sticks around, as you pointed out, and self-pity in print just gets you laughed at even harder behind your back here in sweet little Port Townsend. Country mice are just as big of assholes as urban mice, plus you have to see them when you go to Safeway, at least you do if you live here.