The Workshop in Quilcene 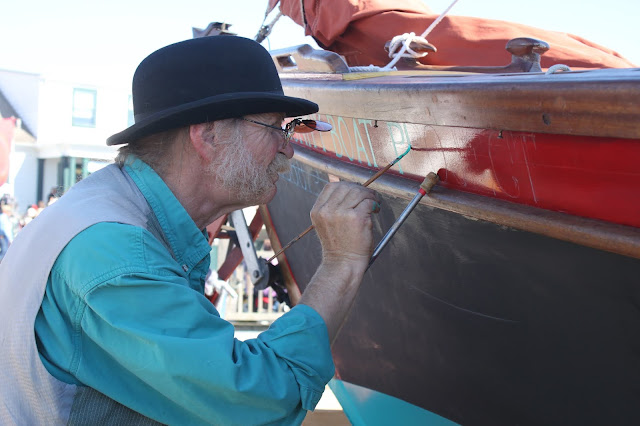 On Friday, August 3, the Workshop in Quilcene hosted a presentation at that town's delightfully sensible Community Center. During the heart of the discussion, a couple of really great sailors were outside ministering to a pickup truck.

Inside, Carey Seefeld, a delightfully sensible person (a sailmaker) told the free-pizza-snarfing group of about 50 about the Quilcene Workshop and Learning Center, a woodshop, maker-space, and public community resource for everyone in the South County, with a focus on school-aged teens; they'll start offering shop classes to Quilcene High Schoool students this fall.

Seefeld is one of those great and powerful young boat people -- an idealist who also happens to be pragmatic, resourceful, and skilled. She and Clark Hallem and Brandon Deming are making this idea happen.

They've signed the lease on the old US Forest Service sign-making shop, a big, 2-story, wooden 1930s building that belongs to the Quilcene Fire Dept., has been sitting largely unused, and needs a new roof. It's building #2302, behind the Fire Station office on Herbert Street.

Liability insurance is in the works; Homer Smith Insurance quoted about $1,500 a year, Seefeld said; someone in the audience said he could help her get insurance for $675.

Did I mention the pizza? It was good, from the Timberhouse. Someone had also brought some sort of apple dessert, and there were incredibly good brownies.

I love this kind of stuff. The US appears to me more and more like a third-world country, and with violence, homelessness, hopelessness, poverty, proto-fascism and all that crap pounding on the door, we've got to practice working in groups.

They're looking for donated tools, materials, and volunteer time. Money is good, too, to pay for stuff like renting  porta-potty and stuff like that. In fact, there's a $5,000 matching-funds offer right now for all donations to the Workshop in Quilcene that are donated through the 501c3 nonprofit Count Me In for Quilcene, which is currently acting as their fiscal agency. "Count Me In for Quilcene" will not take fees from the donations.

The Workshop in Quilcene is, in official now-terms, a state-recognized charitable organization, working toward the nonprofit status that will allow them to take donations. "This first year, we're not really in it to get paid," Seefeld said. The Quilcene School District, 4-H, and the Worskhop are launching their pilot program this year, focusing on hands-on skills development for teenagers.

Here's a really, really cool thing: David Harkinson donated all of his power tools -- a huge shop full of tools, including a full dust-collection system and table saws and all sorts of other loud dust-producing wonderfully useful tools. He also made a bunch of lovely little Q-shaped wooden pendants that were given away as souvenirs from this meeting. Earrings were for sale. How sweet!

This first year, the kids will fix up the building, learning useful things like fixing window frames, replacing floors, replacing siding, and myriad building-repair skills. Carey said they've already started cleaning the place out, and have filled up two huge dumpsters with rotten insulation and other garbage, and the building is ready to start being worked on. They're not aiming for a fancy facility, Seefeld said, just something "safe, waterproof and structurally sound."

Many QHS kids are interested; the idea is they'll eventually earn Career & Technical Ed (CTE) credits. The superintendent and the principal were at this meeting, both strongly supportive. The Workshoppers are also in cahoots with the PT School of Woodworking. But the place is for more than just woodworking; metalworking, welding, and other industrial arts can also be taught there, and will be, if people come to teach them. It's sort of like the Community Boat Project, where volunteers bring their expertise, so you end up with, for example, woodcarving and banjo-building, as well as boatbuilding.

The meeting was mostly to get the word out and to gauge potential resources and involvement. If you want to get involved, email:  TheWorkshop.Q@gmail.com, or call/text Carey at 914-262-6819.

The Workshop is accepting pledges of:

Brian Cullen, a Quilcene resident, spoke about the great pool of talent in Quilcene. (Is that the lake off Linger Longer Road? I was wondering what it was called). He moved most recently from Virginia, where he was involved in the Alexandria Seaport Foundation, a similar kind of place started modestly and for kids. "It was hugely successful," he said. "I'm just speaking for myself," he kept repeating, saying the Worskhop "will make an impact that will be a very positive impact for the community."

Some people brought up the idea of leatherworking and pottery; and yes, the Workshop could also do these kinds of things. Seefeld said Chris Llewellyn has pledged 3 commercial sewing machines. It's also meant to be a place for business ideas to be hatched and incubated, like the idea of a kayak-rental business.

In Port Townsend, on the same evening, was a meeting of the Anarchist Utopia Society. I wonder what they talked about doing? I love how the world always has these pockets of really awesome stuff going on. I've mistakenly gone to lots of things that turned out to be duds, but I'm heartened to keep remembering there's pockets of cool all over the place and I'm bound to step in another one eventually. Perhaps the Anarchist Utopia Society was a band? More power to 'em. They should come sit by the woodstove, sometime, have a cup of coffee and play some tunes while people work.