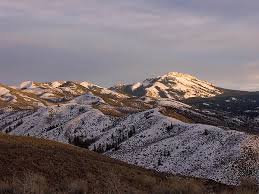 Today it was rainy and even snowed, but in the evening the sun was golden and just after seven I walked from my apartment to City Creek, following the creek up from where it joins the Portneuf just after the channelization begins. I took the second steep trail up the left slope to the Rim Trail, turned left and followed it around to where it hooks up again with the gradual trail back down to the City Creek trail.
There were a lot of birds in the junipers just past the barbed wire fence, on the hillside closest to the water tanks. I saw many magpies and saluted them, and a gang of robins, and heard lots of meadowlarks. I looked for the things Justin identified for us at Saturday's Idaho Master Naturalist meeting: threetip sage, big mountain sage, and basin sage; cheatgrass and crested wheatgrass; hawthorn, nightshade, Russian olive; prickly lettuce, and the tubular flower that looks like a Groenig animated female head.
I also watched the clouds moving overhead to the south. Pink and gray.
Lots of seagulls, too, particularly early in the walk, "wheeling." The thoroughly damnable expression.
I tried to walk in the narrow mountain bike trail. Mud was sticky in some places, very few; mostly just the fine brown dirt. The yellow grass looked like blond hair. The gray clouds behind China Peak very dark gray, as was the last bump on the east bench's northern edge. Mountains visible behind the Great Southern Butte. Mist and fog over the mountains to the south, though.
I found a hat hanging on a hawthorn tree by the first City Creek trail bridge. I carried it awhile, then hung it on another tree. It was blue with a yellow pattern, a wool/acrylic blend with a poly fleeece lining that was torn in one spot. Too ugly to keep.

A public display of affection