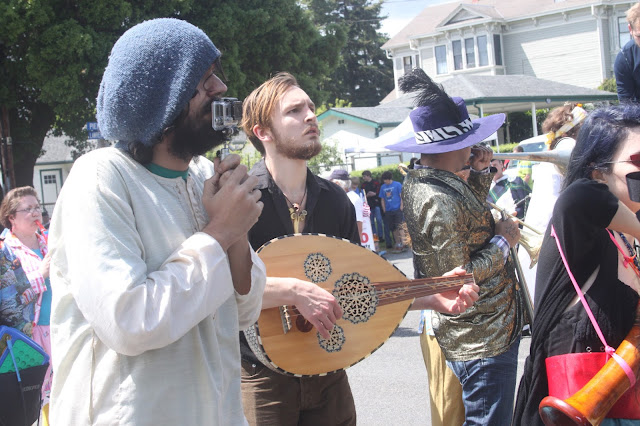 Greg Brotherton hosted a "listening party" at the Disco Bay Detour on April 7. He owns the Detour, as well as the Sea Change cannabis store next door. A friendly fellow with a charming gap-toothed smile, he worked the room, not standing up to speak at the microphone until about a half-hour after the scheduled start time. Asked by my friend what he wants to accomplish as commissioner, Brotherton said, right away, "I want to make it easier to build houses." Then he talked about his dad, Tom Brotherton, running for PUD commissioner; they both agree that Internet service should be offered through the PUD.
Asked his opinions on the proposed Pleasant Harbor Master Planned Resort in Brinnon (a complex of 800-890 new condominiums around a 9-hole golf course on Black Point, squeezed between Highway 101 and Hood Canal), Brotherton said that he had not heard from the opposition to the project.
I guess that means he supports it.
"We need those tax dollars," he added.
For not having heard from the opposition, he sure knew a lot about the proposed project. He said 30 percent of the units would be occupied full-time. He said they expect 4,000 extra cars per day on Highway 101. He said, "what I've heard from residents is that Brinnon's hollowed out ... not that entry-level jobs are what you want to create."
So, my sense of Brotherton was that he knows why the project is a bad idea -- it would make traffic horrendous on Highway 101; it would only create entry-level jobs; and it is strongly opposed by environmentalists, including the local branch of the Sierra Club, which officially opposes it. It seems to me that Brotherton is glibly pretending there is no opposition to Pleasant Harbor Master Planned Resort, because it's something that will probably benefit his own businesses. He seems to know damn well it's not going to really help people in Jefferson County, except the folks who get the jobs building the place, four or five managers once it's done and a couple more maintenance folks. "You get in bed with a developer, and that developer has dominion over you forever," he said.

I had just started to chat with Greg Brotherton's mom when Greg got up to talk, and asked everyone to be quiet. "Stop talking, Mom," he said. She had been telling me that when he was in school, he had written a parody of "King Lear" that his teacher refused to publish.

Brotherton told the assembled group (most of whom were there to hear Baelin play her guitar) that "if you think you can make a positive change, local government is where you can do it." He said his dad had been on City Council, and that they had moved here in 2011; his folks opened the Quilcene Village Store. "We really enjoy the entrepreneurial life," he said, talking about his opening of Sea Change Cannabis. "It's a struggle, but it's really gratifying," he said. He wants to help young families, he said. His time on the school board taught him "about the budgetary decisions that you have to make, and the mud," he said. "I was able to be a proactive member of the school board and get things done." He said he wants to help make a positive difference for rural development here in Jefferson County. He said, "thanks a lot. Vote for me, I'm Greg Brotherton."

He may well be the best candidate, but I personally am opposed to building condos on Hood Canal. Especially ones that you only expect to be 30 percent occupied. What a waste of space and materials!

Here is the text of an email that I wrote a week or two ago to the Jefferson County Board of County Commissioners. Did you know that anybody may write to them? That they need to hear your opinions in order to act on them? Their email address is this:  jeffboc@co.jefferson.wa.us

Here's what I said:

Please do not let this project go forward.

Thank you for your service to our beautiful county.